For a Few Pennies More by debut author, Trevor Norton, launched this week.

And if you love real-life drama and plenty of laughs, this historical novel is perfect for you. 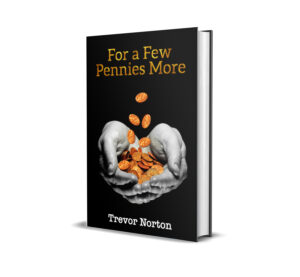 Set in 1960/70s England, this entertaining story is based on the bittersweet exploits of Charles Henry who leaves school in 1959 without any formal qualifications.

Being a savvy, hard-working fella, however, he soon establishes himself as a builder and takes on small mundane jobs that earn him a few pennies more. Building up his colourful gang of loyal trades, [who are always up for a laugh] Charley then takes on the larger nightmare projects that other builders run away from. The most testing of all – which takes over his life – is Arthur Bainbridge’s motel.

As far as Bainbridge is concerned, it’s business as usual while Charley and the boys demolish more than half of the existing buildings, before building 30 new bedrooms, all with en-suite facilities. It seems that the only one who can control the eccentric motel owner is his fire-spitting dragon of a wife.

Then there’s Mr Wolfe, who goes to an auction to buy a fairytale dream, but bags himself a property of extreme nightmares instead! Cue Charley and the boys who are tasked with extending and restoring the derelict 300-year-old Walnut cottage. However, before it is even remotely habitable, Mr Wolfe causes absolute bedlam when he moves into the cottage, together with his very sexy and flirtatious wife Jane, their teenage daughter Samantha, and a large ferocious looking dog called Satan!

This brilliant book is available in Kindle and paperback formats. It would make a fab Father’s Day present, especially if your dad worked in the building/construction industry.

Sample the opening pages on Amazon and venture into this hilarious, entertaining read that’s packed with nostalgia. >>>

Love to make your author debut this year? I’d love to help!

You can check out my self-publishing services here or message me via the contact form.